Introduction Of Golf Fitness – Twenty years ago, been used in the same sentence, especially when the majority of golfers were beer-bellied guys riding in carts. Many did not the words golf and fitness might have never even view golf as a sport, but rather a game played by nonathletes too old or out of shape to play more strenuous sports.

This belief changed after Tiger Woods began dominating the world of golf. Through fitness, Tiger Woods completely changed his body and swing. He went from being a thin teenager with a loose, unreliable swing to having the body of an elite athlete with a controlled, powerful swing that has forever changed the game of golf. Legendary golfer Gary Player, with nine major championship wins, credits Woods for revolutionizing the game of golf.

Player says that Woods’s success has been noticed by the rest of the Tour and is making a big impact on how the game is perceived. “He raised the bar for those on Tour,” Player said about Woods 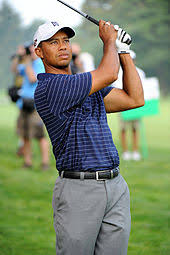 If you put the work in, and that means on the range and in the fitness room, it pays off. When you stop working at it, that’s when you lose your edge. It’s as important what you do on the course as what you do off the course.
—TIGER WOODS

Ask any Tour player today and most will tell you that they have had to either beef up their fitness routine or start a program all together just to keep from getting lapped by the top players in the world. Padraig Harrington, who won two majors in the 2008 season, the British Open and PGA (Professional Golf Association) Championship, said
that Tiger Woods inspired him to work even harder. Many PGA Tour players are also thinking ahead to the Senior PGA Tour, so they are adding fitness to their daily regimens to prevent injury and extend their playing careers.

PGA Tour player Retief Goosen, the winner of two US Open Championships, credits Woods for inspiring him to get into condition. “I was looking at myself in the mirror and thinking, ‘I look an If you put the work in, and that means on the range and in the fitness room, it pays off. When you stop working at it, that’s when you lose your edge. It’s as important what you do on the course as what you do off the course. bit out of shape,’” Goosen said after winning the Transitions Championship after turning 40 during the year. “I started to work hard in the gym.

I feel better about myself and am a lot more consistent. I think the whole Tour has learned a lesson from Tiger.” Today, most Tour players have incorporated some sort of fitness program into their lives.

Introduction Of Golf Fitness – But many golfers will still argue that technology and equipment have changed the game more in the last twenty years than fitness and will point out such players as John Daly and Tim Herron as examples of out-of-shape golfers who still compete. These golfers shrug off the importance of a pre-round warm-up and opt for a hot dog and beer at the turn for energy while relying on their high-tech drivers and forgiving irons as fixes for their serious swing flaws. These golfers still have the mindset that spending hours on the range beating balls and playing as much as possible with their new equipment, rather than spending some time working on their bodies, will eventually lead to improvement and lower scores. But as the professional ranks have increased their yardage off the tee and improved their control of the ball around the greens exponentially through high-tech equipment and improved fitness, the
national handicap, about 19 for the average golfer, has not changed much at all, despite the advancements in equipment. The missing link for these underachieving golfers is fitness. What these golfers don’t understand is that even if they were to take lessons with a professional and get out on the course with their new clubs three times a week, if they have not addressed their physical deficiencies, their game may not improve to its full potential and may actually weaken with each hole throughout around due to fatigue.

Do you have to be super flexible like Camilo Villegas, bench press 200 pounds like Tiger Woods, or do triathlons like Lorena Ochoa to be in golf shape? Not necessarily. Golf fitness is not about bodybuilding or even losing weight, it is about playing better golf. Being in “golf shape” means being able to play 18 holes without getting tired or losing concentration, being flexible enough to make a complete shoulder turn, or just being able to swing a club without pain.

Golf, although not thought of as a strenuous activity, requires a higher level of fitness than most people would think. In a single round, a golfer will take an average of 300 swings (including practice swings) and walk 7,000 to 8,000 yards, the equivalent of four to five miles. Swinging a club over and over again twists the neck, back, shoulders, and arms unnaturally, and the physical stress loads become substantial. “In the last decade, golfers have come to grips with the fact that strength, flexibility, and overall fitness play a critical role in the game. Stronger, fitter, more flexible athletes hit a ball farther and straighter, have better touch around the greens, and respond better under pressure in the closing holes than do their weaker counterparts. Golf is more than a game; it is a sport and, as is the case in all athletic sports, fitness is crucial. So being fit for the game of golf is the future,” says PGA teaching professional and Golf Fitness Magazine contributor Cindy Reid.

Do you need to start pumping iron or jogging to get into golf shape? Although those things will help, they are not necessary to improve your game. There are many other simple things you can do that don’t even involve breaking a sweat to improve your golf game. If you already work out, you can add a few golf-specific exercises to your routine that can make huge improvements to your game. If you have never worked out, you can start by working new habits into your daily life, like warming up before a round or spending a few minutes a day stretching. Paying attention to your diet can also help you play better golf. Managing your food intake and adding certain nutrients to your diet can help you concentrate and focus more on the golf course.